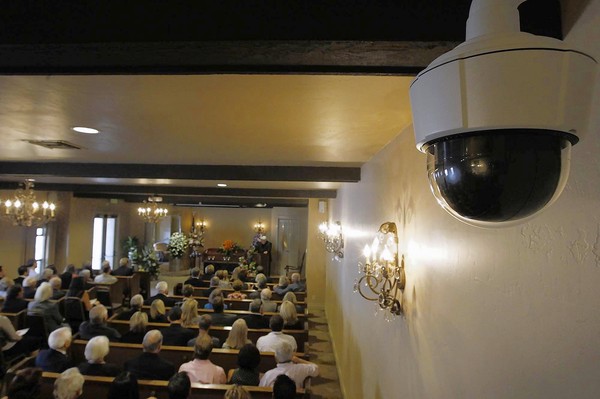 The $12-billion funeral industry is increasingly making online-video streaming available to customers. The option enables friends and relatives of the deceased to tune in to services on the Internet if they can’t attend in person.

After Getty Images photographer Chris Hondros was killed covering the Libyan uprising this spring, more than a thousand people crowded into a Brooklyn, N.Y., church for his memorial service.

Another thousand attended — virtually — through a webcast streamed onto their computers.

The $12-billion funeral industry is going high tech. Crematories are being equipped with touch screen controls. Quick response bar codes are being chiseled onto headstones for visitors to decipher using their smartphones.

And funerals are being streamed online for friends and family members anywhere in the world.

Forest Lawn Memorial-Parks & Mortuaries, the funeral home and final resting place for Hollywood celebrities such as Bette Davis and Lucille Ball, first offered webcasting at its Hollywood Hills and Glendale cemeteries in 2008.

It proved so popular that the company expanded the service to its seven other Los Angeles-area locations the last two years, said Scott Drolet, Forest Lawn’s senior vice president of operations. “When a loved one passes away,” he said, “people either need to jump on a plane or have to miss the funeral entirely.”

The company has streamed more than 400 services and is averaging one webcast a day.

Funeral homes usually charge $100 to $400 for a webcast — Forest Lawn prices them at $275 — although some funeral homes are throwing in the service for free to get people comfortable with the idea.

Video cameras are normally associated with festive occasions such as weddings, and Letty Munoz of El Paso thought it was “a little weird and macabre” when a funeral home in Oxnard offered to stream the funeral services of her mother-in-law for family members who could not attend in person.

She ultimately agreed, since none of her three children could get the time off work to attend.

“It was just so strange that they could see us while everything was happening, and it turned out to be a really good thing,” she said.

Another advantage of streaming is that the webcast can be preserved on a DVD as part of a family’s oral history of members who have died.

“The eulogy is really the summation of a life and what this person meant to those around him,” said Dan Grumley, owner of Event by Wire, a software company that creates webcast software for funeral parlors. “It’s an archive for future generations that are unborn. It becomes a very rich piece of family history.”

No one has a good estimate of how many funeral homes are offering video services. John Reed, a past president of the National Funeral Directors Assn., estimated perhaps 20% of funeral homes are webcasting funerals.

In a few years, however, he expects almost all mortuaries to offer the service — pointing out that tech-savvy baby boomers are at an age at which their parents and other relatives are dying, and are easy converts to the benefits of streaming.

“In the next five years, streaming is going to boom because of the baby boomer generation,” Reed said. “They grew up in a more open society and are more comfortable with technology like this.”

At his funeral parlors, Reed sometimes handles the camera. He’s proud of his work.

“It’s almost like sitting there in the chapel,” he said. “I even zoom in on the deceased a few times. The sound and picture quality are great.”

The software packages produced by Event by Wire, based in Half Moon Bay, Calif., include funeral-specific features, such as online invitations to the streams. The company did business with 80 funeral homes in 2008. This year, it’s up to 300 so far, Grumley said.

Competitor FuneralOne, based in St. Clair, Mich., has seen a sharp uptick in business over the same period, from 125 funeral homes to more than 1,000 this year.

“Facebook and Twitter made us more comfortable with sharing intimate details about ourselves online,” said FuneralOne owner Joe Joachim. “And technology is enabling people to interact and socialize online in convenient ways.”

Crystal McCoppin, who owns a computer graphics firm in Mammoth Lakes, could not get away from her business in June to attend the funeral in Laguna Hills of the father of a close friend. McCoppin, 58, who grew up across the street from the family, considered the man her “second dad.”

“I was heartbroken, thinking that not only was I going to miss the funeral, I was also not going to be there to support my girlfriend,” McCoppin said.

She missed the live stream of the event. But the funeral home, like many offering the service, archived the video online for later viewing.

“I felt like I was there and I could feel the love in the room,” she said. “I could also call up my girlfriend afterward and tell her, ‘I loved what you said during the eulogy. I loved your dress.’ “

During the memorial service for Hondros, colleagues and friends from as far away as Afghanistan, South Korea, South Africa and Libya not only watched the live stream but left comments in an online chat room.

When Hondros’ fiancee, Christina Piaia, read from a love letter she had originally planned to open at their August wedding in that same church, the chat room lit up.

“Christina, you are strong. Wow. Thank you,” wrote one viewer. Another wrote, “this is soooo sad.”

O’Connor Mortuary in Laguna Hills began offering streaming in June partly as a reaction to a tight economy. People are comparison shopping for everything, co-owner Neil O’Connor said, including caskets and funeral arrangements. The funeral home has done 14 webcasts.

“The ability to webcast is just one more way to differentiate from the competition,” O’Connor said. “When people hear of the service, they usually agree to it right away.”

However, as with all technology, things can go wrong.

When Corazon Miranda Zarate of Los Angeles died in May at age 59, her family decided to webcast the service from Forest Lawn. The Zarate clan has family and friends flung across the world in the Philippines, Saudi Arabia, Britain and elsewhere, daughter Cheryl Zarate said.

“We knew it was important for family to somehow witness and be part of the service,” she said. “But especially those in the Philippines or in Third World countries, it was incredibly hard for them to get a visa on short notice to come to America.”

Zarate used Facebook and email to invite people to the stream. But right before the service, she got word of a technical problem, and ended up having to send Facebook messages to relatives overseas that the video wasn’t going to be streamed live after all.

“It just added to an already stressful, emotional day,” Zarate said. But the webcast was preserved online for 60 days. So far, 105 viewers have watched it in 25 U.S. cities and eight countries. For a week after the funeral, Zarate’s father watched a part of the service every morning.

“It became part of the mourning process for him,” she said.