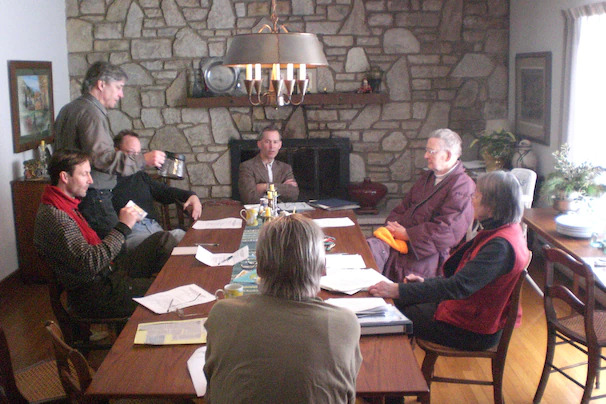 Amelia Baxter – Cameron and Rachel Gundersen, right, meet with their sons Cameron Jr. (back to camera), Roald, left, Gregg, Joshua (partially obscured) and Adolf to make plans for the time when the couple is gone.

Two world-class bagpipers in full regalia faced each other in front of my parents’ living room fireplace. We knew full well the kind of volume they were capable of, but they didn’t seem out of place. My brother had invited them over to give the whole family a musical cheer for finishing the weekend’s monumental task: laying out on paper — with exacting detail — what will happen when my parents are gone.

We decided who gets Grandpa’s Orthodox icon, a gift from a fellow doctor he had helped immigrate to the United States. We settled the question of what would happen to the cabin in northern Wisconsin that we loved but didn’t want to manage. And we decided how to protect for future generations the woods we’d played in as kids.

Then we celebrated my father’s 80th birthday.

“Amazing Grace” would have been out of place. But the piping sure wasn’t. Somehow the evening combined the gravitas of a memorial service with the easy sharing of a holiday dinner. And the best part of it was that my parents were there to enjoy being the center of attention.

Talking with your parents about aging and death is one of the hardest things we will ever do. But it is better to make decisions calmly and deliberately than to do so in the middle of an emergency — or its aftermath. Talking and planning are the best tools we limited humans have to manage our mortality. The bagpipes, of course, are optional.

For some years my four brothers and I had tossed around the idea for this gathering. It just seemed sensible to get together and hear about the plans my parents had made for their later years and for their estate. (My wife dubbed it a “pre-mortem” midway through the weekend, and the label instantly stuck.)

It had been hard to get traction. My parents had done some planning, but getting us kids actively and directly involved in so many facets of their lives would mean a huge role reversal. Maybe that was why I sensed that for a long time neither of them had seemed psychologically ready for such a gathering. Meanwhile, there were other, more mundane delays. Meetings with lawyers and other advisers dragged on and on. And just assembling all the documents seemed overwhelming.

As for us kids, the role reversal wasn’t easy to embrace fully. In the first place, the decisions needed to be my parents’; the same was true of the decision to get together to discuss them. None of us wanted to seem pushy (much less grasping when it came to their estate).

Then, about a year ago, everything changed. I’m still not sure why. Maybe a new set of decisions — about finances or about health care — sent my parents over the edge. Perhaps they got weary of dealing with all of them on their own. Or possibly they became aware in a way they hadn’t been before that we were willing to help. Within days of each other, both my mother and father expressed an interest in a group meeting to discuss the whole range of issues they were facing in old age.

At that point, the decision to get together became easy. My parents wanted our support, and we wanted to give it to them. Uppermost in our minds was the thought that it was better to start navigating the waters ahead before they got turbulent and before our collective ability to navigate them started to decline. (We were in our 40s and 50s, our parents in their late 70s. Experts say it’s good to start even earlier.)

But our motivations weren’t only practical. We knew going into our planning sessions that they wouldn’t be emotionless affairs — nor did we want them to be. We all wanted a chance to share our feelings. If nothing else, I think we wanted a chance to tell our parents how much we loved them and how ready we were to support them in the years to come.

You may be thinking that all of this sounds too good to be true, that “my parents won’t talk about anything,” or “my sibling is neurotic” or “totally uncooperative.” Okay. I’ll admit that I’d had similar thoughts. So, what if you’re up against real resistance? What if your parents insist on procrastinating or tell you to mind your own business? What if a sibling refuses to join in the family discussion?

True, we were lucky. In my case, both parents and all four brothers were pretty gung-ho. But that attitude took a while to develop. It came about only after we’d made repeated suggestions to my parents and reinforced them with multiple articles about the usefulness of retirement and estate planning.

When my parents made it clear that they, too, were ready, we all moved quickly. I developed a draft agenda for our sessions in time for everyone to make suggestions. I also sent my mother two documents to complete: a list of key contact persons and a list of key documents (legal, financial, medical and so on) and their locations. In the weeks before we met, I checked in on my mother to encourage incremental but steady progress in filling them out. With a meeting now imminent, she and my father also took the initiative to finalize several key legal documents that had been left dangling for months — powers of attorney, wills, etc. All of this greatly eased the planning once we got together.

We’d agreed to start on time and have plenty of coffee and pastries available to avoid interruptions. We also agreed to limit each session to about three hours to avoid fatigue. One brother was to lead the meeting, another was to take notes — to make sure that everyone was heard, that we stayed on point and that we had a record of who was to do what later. We even gave some thought to the seating arrangement.

Even more critically, we paused to remind ourselves that we were there first and foremost to further our parents’ interests. In case we had any doubts on that score, my mother — daughter of a Lutheran minister — quizzed us on the Fourth Commandment. (I think she was surprised when one of her sons dredged up “Honor thy father and mother” from his confirmation classes decades before.)

Having those key preliminaries in place helped us keep on schedule. It gave us time to spend on sentimental digressions from the practical business at hand, time for tears and laughter as well as decisions and plans. We dealt with everything from medical directives and where my parents wanted to live if one or both of them became physically incapacitated to the contents of their wills and burial arrangements.

How did my parents feel about the weekend? My mother told me recently that the three words they found themselves using most often in describing that weekend were “relief,” “peace” and “pride” — in seeing us come together, speak up, cooperate and have a good time.

The process moved into its implementation phase the day I returned from my parents’ house and will continue until they have “gone to their reward,” as my father likes to put it, and their estates are settled.

The first thing I did was to generate a master to-do list and circulate copies to everyone. Other tasks had no names attached to them.

All told, the list was pretty formidable, despite how much work my parents had done before the pre-mortem. But pretty soon we all settled into a rhythm of tackling a single task or sub-task every week or two.

The pre-mortem process we began as a family a little more than a year ago goes on. We did not abolish aging and death that weekend. But we did all we could to prepare for them — and to affirm life.

In that respect, the “pre-mortem” label is good as far as it goes, but it doesn’t capture the celebratory flip side to our very businesslike efforts at working through end-of-life decisions with my parents. It didn’t capture the joining of work with joy, of management with sanctification, of anticipation with retrospection, of affirmation with acceptance. It didn’t capture the way we substituted a series of bagpipe-driven highland marches in the living room for “Amazing Grace” in a chapel. I have no better name for what we did that weekend. But it is among the most positive and significant events of my middle-aged life.

When the piping died down, the transition from taking care of business to celebrating our efforts and my father’s 80th birthday was complete. We adjourned to a local restaurant’s private party room for several hours of serious revelry. The one spouse who lived in the area joined us, and my 11-year-old son did me proud by joining in the speechmaking (and eating snails) for the first time. We had spent the past two days discussing death and dying. But it finished as a celebration of life.

Gundersen is a Boston-based fellow with the Interactivity Foundation, a public-policy think tank.